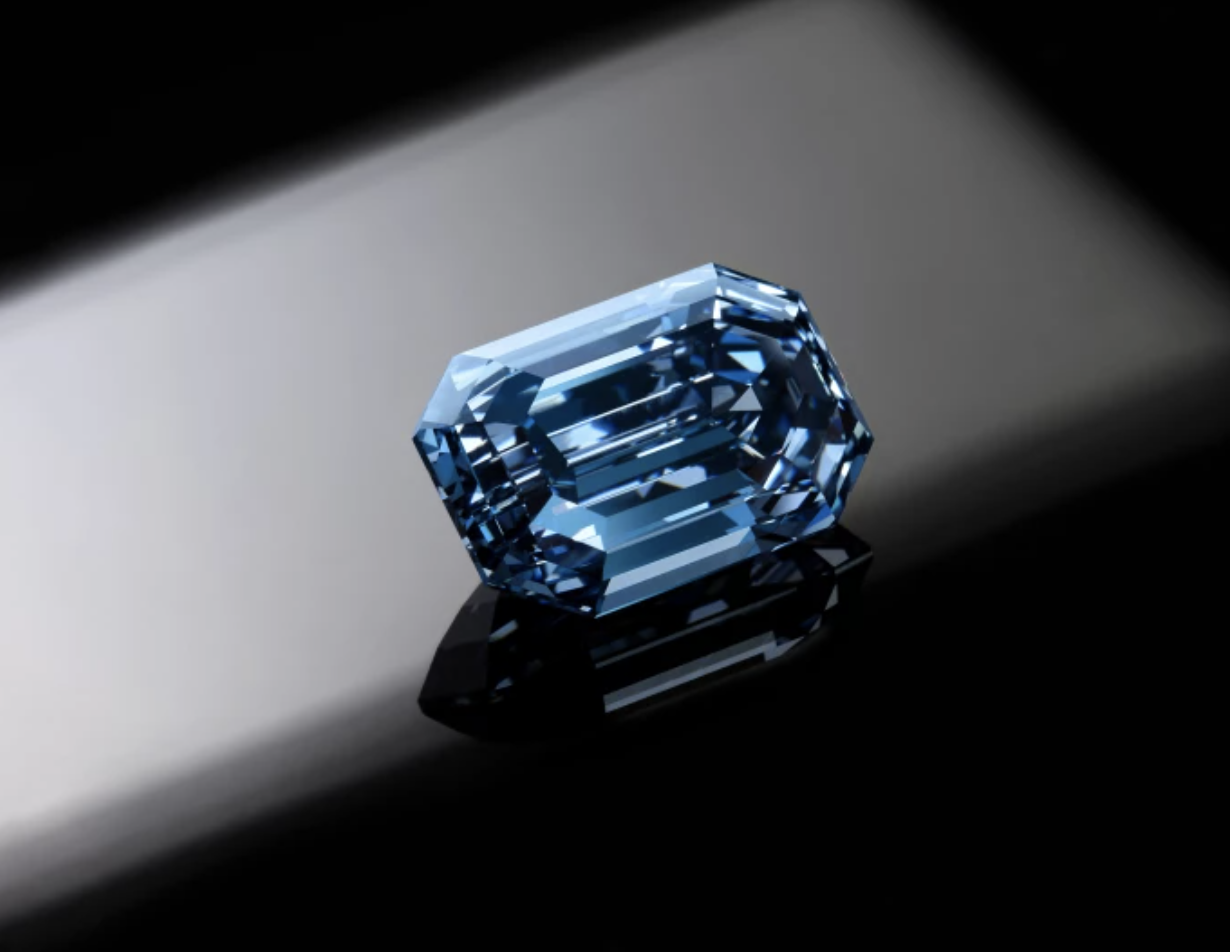 Sotheby’s is proud to present The De Beers Cullinan Blue, an extraordinary natural treasure and one of the most valuable blue diamonds ever to be offered at auction. This extraordinary 15.10 carat step-cut blue has been cut from an exceptional rough stone discovered in April 2021. In its masterfully crafted, newly formed state, it now re-emerges as the largest vivid blue diamond ever to appear at auction and the largest internally flawless step cut vivid blue diamond that the Gemological Institute of America (GIA) has ever graded. Blue diamonds of this importance are exceptionally rare, with only five examples over 10 carats ever having come to auction, none of which have exceeded 15 carats, making the appearance of this flawless gem a landmark event in itself.

“This diamond ranks as one of the best De Beers has ever seen. It is extremely rare and unique, and as the Home of Diamonds, De Beers is pleased to join together with Sotheby’s to bring this diamond to the world.”

Among the rarest of all coloured diamonds, blue diamonds are a fabulous fluke of nature, their blue usually caused by the presence of trace amounts of the rare element boron within the diamond crystal lattice. Quite aside from their rarity, the very fact of their colour makes blue diamonds ultimately covetable. Voted as the favourite colour of both men and women worldwide, the unequalled popularity – and mystery – of blue has endured for millennia. From Tutankhamun’s lapis lazuli-encrusted funeral mask, to the unmistakable works of Yves Klein. The poet Goethe felt that blue had “a peculiar and almost indescribable effect on the eye,” and the expressionist painter Wassily Kandinsky – one of the founding members of the group of artists known as the Blue Rider – wrote: “The deeper the blue the more it beckons man into the infinite, arousing a longing for purity and the supersensuous.” In nature too, blue is inextricably associated with the rare, the exotic and the magnificent: birds of paradise, tropical butterflies, peacocks. And, rarest of all, blue diamonds.

While other coloured diamonds can be found in mines around the world, there are very few sources for blue diamonds, most of which are recovered from the Cullinan mine in South Africa. Cullinan has yielded many of the world’s most famous diamonds, including the 530-carat Great Star of Africa, the largest faceted colourless diamond in the world. Cullinan continues to produce some of the world’s most extraordinary treasures including all of the De Beers Millennium blue diamonds, in particular the De Beers Millennium Jewel 4, a 10.10 carat oval-shaped Fancy Vivid blue that sold for $31.8 million at Sotheby’s Hong Kong in April 2016.

The natural exclusivity of these precious gemstones has ignited the imagination of connoisseurs over centuries. Early records can be traced back to the 17th century when Jean Baptiste Tavernier sold a dark blue diamond to King Louis XIV of France, which was originally called the Tavernier Blue, and then the French Blue as a part of the French Crown Jewels.

Perfect according to every critical criterion, The De Beers Cullinan Blue has achieved the highest rankings under each of the standards by which the quality of a colored diamond is judged. It has been graded Fancy Vivid Blue by the Gemological Institute of America (GIA) – the highest possible colour grading, awarded to no more than 1% of blue diamonds submitted to the GIA. It also boasts exceptional clarity, having been declared Internally Flawless by the GIA; in addition to which, it was found to have excellent polish and to be of Type IIb, a rare category which represents less than 0.5 % of all diamonds. Adding to the diamond’s allure is its classic step-cut – a style most associated with white diamonds – that is immensely sought-after in rare colors.

Given that diamonds are the hardest material on earth, great skill and precision is needed to cut them. With blue diamonds, the challenge is yet greater: because of their formation, every faceting process of a blue diamond demands extreme care and precision. There is zero tolerance for miscalculation; any minute error would result in a loss of colour and destruction of the beauty. Most of today’s greatest diamond cutters have learnt their trade from their forebears in an industry that – in spite of the advances of modern technology – still relies to a large degree on craftsmanship that has been handed down through families for generations. To cut a stone of this outstanding importance required a level of expertise and craftsmanship possessed by only a small handful of cutters.

This article originally appeared at https://www.sothebys.com/en/digital-catalogues/the-de-beers-cullinan-blue?locale=en