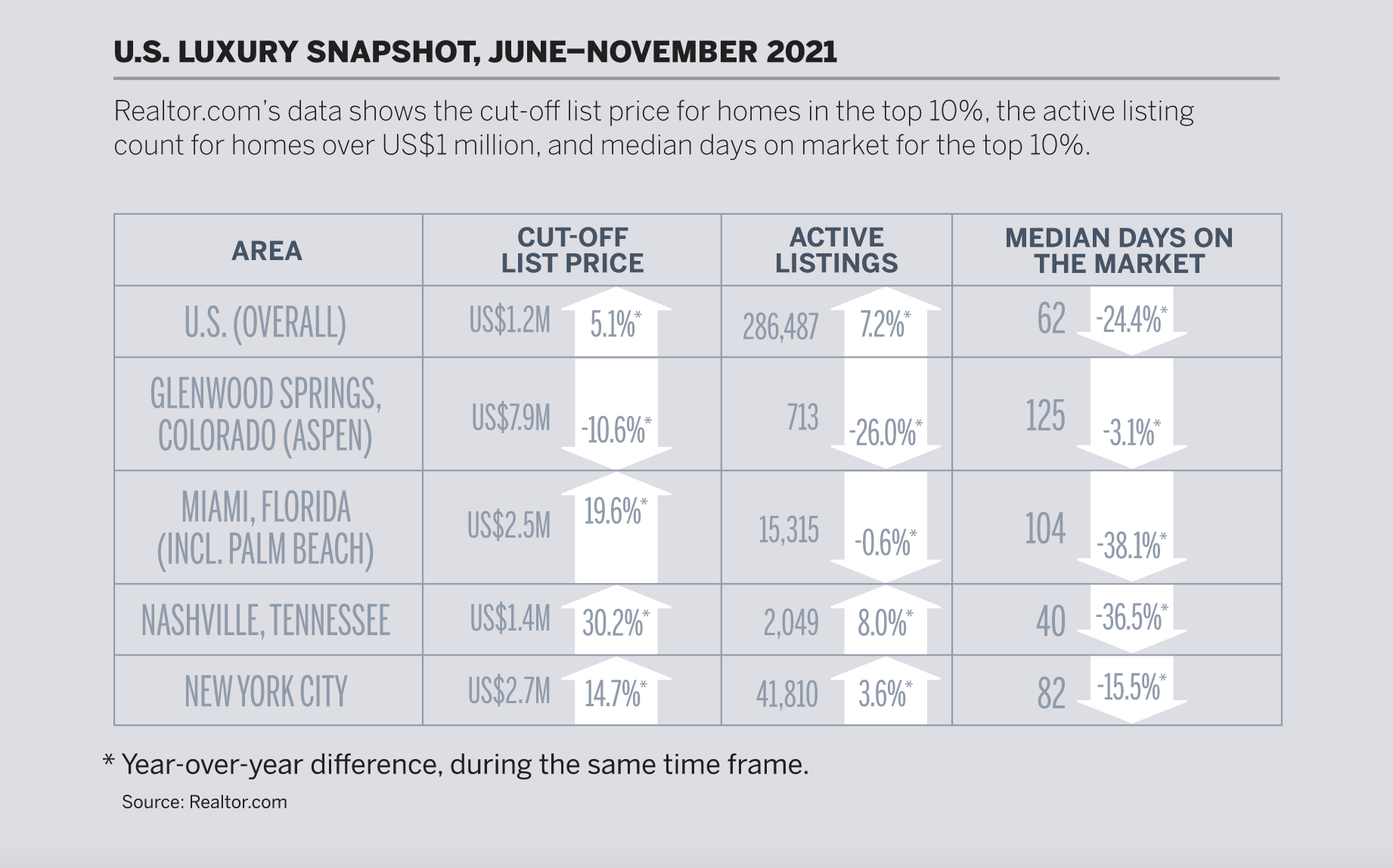 The expansive growth in the luxury-home market during the Covid-19 pandemic is expected to continue in 2022, albeit at a slower pace, as low interest rates and inflation fears push wealthy individuals toward alternative asset classes, and countries reduce economic-stimulus measures.

Across the globe, luxury-home sales reached record levels in 2021. The U.K. saw a major increase in sales priced at £5 million or more during the first half of 2021, while its stamp-duty holiday was still in place. While that program has since ended, the luxury market there is expected to benefit from foreign investors coming back into the market, as travel restrictions loosen in some parts of the world.

In the six months from June to November 2021, listing prices for homes in the top 10% of the market in the U.S. were up nearly 20% compared with the same period the year before, according to data compiled by Realtor.com. 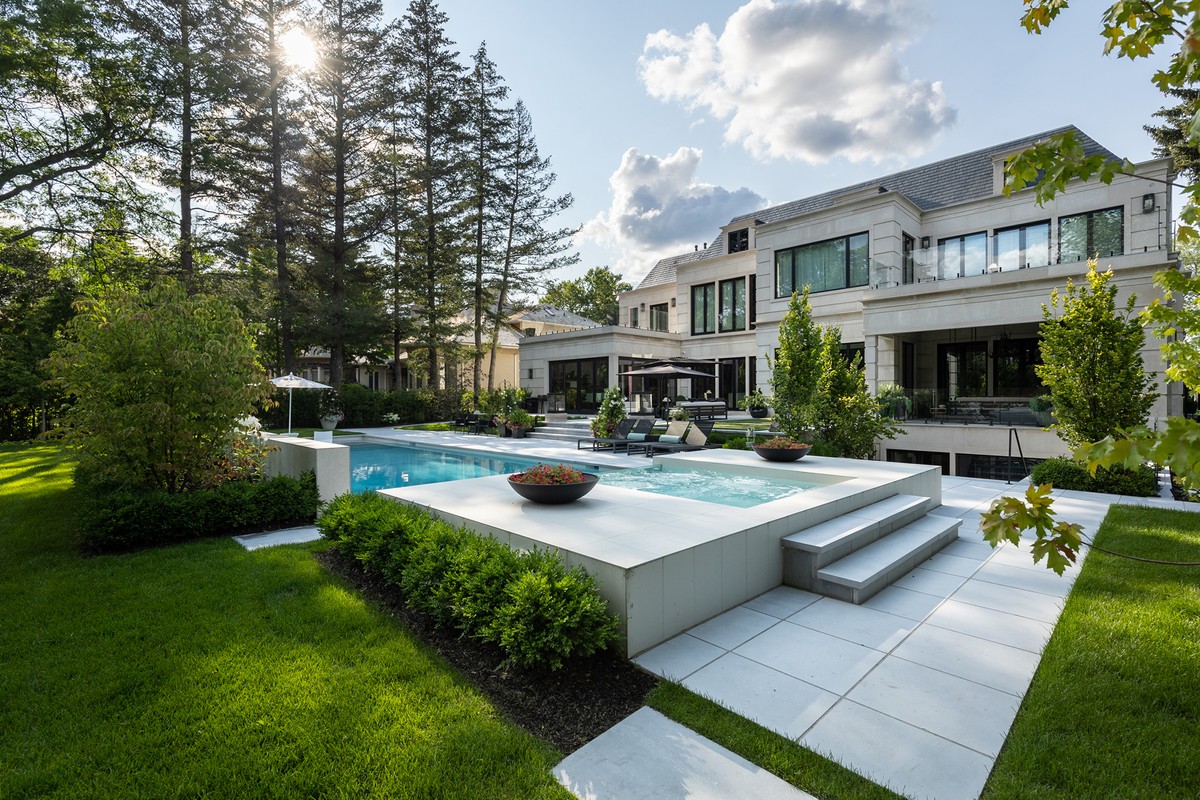 A 12,000-square-foot home in Toronto’s Bridle Path neighborhood is a serious trophy property, complete with a pool, hot tub, and water features

“We don’t think the current pace of home-price growth, at least in the aggregate, is sustainable,” says Joel Kan, associate vice president of economic and industry forecast, the Mortgage Broker’s Association.

Still, as inflation rates rise, and developed markets continue to debase their currency, luxury real estate could be an attractive hedge and a way to get out of paper money, says Jonathan Woloshin, head of real estate and financials research, UBS Wealth Management. With experts predicting the 10-year Treasury yield won’t surpass 3% by the end of 2022, real estate may become even more attractive.

“If you look over the course of decades and centuries, luxury real estate—with all its ups and downs—has held value and even grown in value,” Woloshin says.

In late 2021, the U.S. Federal Reserve announced that there could be three interest rate hikes ahead in 2022, and the Mortgage Bankers Association has predicted the 30-year fixed rate could rise to 4% by the end of 2022.

“Every little bit of that rate increase is going to matter more because you’re applying it to a much bigger loan balance,” Kan says.

However, buyers paying in cash or using a securities- backed loan will be less affected by interest rates, if at all, Woloshin notes.

Meanwhile, many countries are considering increasing taxes, which may influence where high-net-worth individuals decide to locate. In the U.S., the current 37% top rate on income will rise to 39.6% in 2026, as 2017 tax reform provisions are scheduled to expire. President Joe Biden’s plans for a social spending bill would also create a new surcharge on high-income individuals whose adjusted gross income is over $10 million—or the top 0.02% of Americans. While those increases may not be enough to make wealthy individuals pick up and move elsewhere, a wealth tax could, Woloshin says.

“We’re seeing more and more of the wealthy renounce their U.S. citizenship, for economic reasons and for political reasons,” he says. Already, the number of Americans who renounced their citizenship hit an all-time high in 2020, at 6,707, according to the Internal Revenue Service.

Even countries that have long attracted high-net-worth individuals on account of their low taxes are considering increases. Singapore officials have hinted that higher levies for real estate may be on the way. The country already has imposed limits on second-home owners and foreign buyers.

In China, some speculate the government may roll out a nationwide property tax. The policy focus is “common prosperity” and addressing the wealth gap. In addition to proposed property taxes and regulatory measures aimed at controlling prices, the development of rental housing has gained traction.

Canadian Prime Minister Justin Trudeau pledged a ban that would keep foreigners from buying homes for two years if he is re-elected. One of his opponents, Jagmeet Singh, called for a 20% tax on foreign buyers. (Already, in Vancouver, residential properties that sit vacant more than six months per year are taxed at 3% of their assessed value, due to a 2016 Empty Home Tax passed by the City Council.) In its 2021 budget, the Canadian government also included a proposal for a nationwide “underused housing tax” that would tax vacant residential property with non-resident, non-Canadian owners.

Even with pressure to recoup revenues lost to Covid-19, it’s yet to be seen whether these proposals become reality. A long-discussed pied-à-terre tax aimed at luxury second homes failed to pass through New York’s legislature this last year.

In a move more favorable to those buying second homes, the U.S. government rolled back a policy meant to limit Fannie Mae and Freddie Mac’s ability to purchase loans for new investment properties, which may mean lower rates for those buyers in the short term. The U.S. also plans to raise the cap for mortgages backed by Freddie Mac and Fannie Mae to close to $1 million in high-cost areas to assist home buyers as prices continue to rise.

Would an increase in interest rates affect the strength of the market in the coming year?

But What About Supply?

While inflation and higher interest rates may play a role in the luxury market, a larger question looms: whether supply can catch up with all the recent demand.

“Because the economy’s still improving, we do expect that inventory to free up, and we’re going to see more transactions, which will help this rapid home-price growth moderate a little bit,” Kan says.

Yet in many luxury markets, such as ski resorts or Manhattan’s Billionaires’ Row, supply is highly constrained.

“We’re talking about a very unique subset of real estate where there is a certain fixed amount of the best of the best,” Woloshin says.

In the coming year, new demographic trends will also impact the market. In North America, millennials and Gen Xers are expected to make up the vast majority of luxury-home sales. Many of those sellers are staying in urban environments, looking to relocate to larger spaces, according to agents who work with them.

Still, others will continue to re-evaluate their lifestyles and move to small towns or suburban areas in a search for more space and a respite from city life.

“People have the ability to live their lifestyle their way,” Woloshin says. That, he says, means that the demand for second homes or relocations won’t go away in 2022.